Mighty small fine for a company with an annual turnover $497 million, which did not admit the conduct, fought the case in court, and which has been fined previously for a breach of the ACL. Whilst maths is not my strong suite, I think that is about 0.07% of turnover! I understand the ACCC was only seeking a penalty of $2 million which is 0.4% of turnover!

This contrasts with another recent penalty hearing where the ACCC were seeking a penalty of $400,000 and consumer redress of $37,000 against a small business, with an annual turnover of $1 million, which was a first time offender and which admitted its conduct at the earliest opportunity. I didn't need a calculator to work that the proposed penalty was 40% of turnover.
https://www.accc.gov.au/media-release/kogan-to-pay-350000-for-misleading-tax-time-promotion
Posted by Mike Terceiro at 14:33 No comments:

“Those who are in pain and need these drugs are paying more. How much more is very hard to tell, but they’re not putting [the price] up by a small amount.”“These things are really hard to detect, because people doing this know they’re doing something wrong and so usually go to great lengths to hide it,” Mr Sims said.“So when it does happen you not only take the company to court and hope you get high penalties, but as you can see here we’re bringing criminal charges against Mr Joyce and if found guilty he could go to jail.“It’s to send the message to people that while you can make money out of cartels, if you’re caught, the penalties are huge.”The ACCC really need to read up on the concept of sub judice contempt.
https://www.brisbanetimes.com.au/national/queensland/medical-company-charged-with-cartel-offences-after-accc-investigation-20201201-p56jln.html
Posted by Mike Terceiro at 14:32 No comments:

Unfortunately, we went down hard in our US ugg case - a jury verdict of $US450,000 for the trademark violation and legal costs $US2m.

Just to give you an idea of how crazy the verdicts were, Eddie sold 13 pairs of ugg boots into the US and two pairs of socks at a total value of $A2123. Given that $907 of those purchases were made by Deckers the actual damage suffered was only $A1216. That means the damages award was 500 times the damage actually suffered. We filed a post trial motion asking the judge to reduce the jury verdict as unreasonable which was rejected.In relation to legal costs, in the US costs do not follow the event. A successful party only gets back their legal costs if they can show it was an exceptional case- eg a case with absolutely no merit which has been pursued in spite of prior warnings. In this case, Deckers never sent a cease and desist but commenced legal proceedings without notice. We also survived a summary dismissal and made it to trial. The judge decided the case was exceptional because it was wilful. Hard to understand how wilfulness makes a trademark case exceptional!Anyway, given the verdicts were so outrageous we have appealed the case to the US Court of Appeals.
https://www.news.com.au/finance/business/retail/us-bans-aussies-from-using-the-name-ugg-boots/news-story/ca01102ae407078da5c7a301a77a4166
Posted by Mike Terceiro at 14:31 No comments:

The Government's report on amendments to the UCT laws for small business came out late last week. Good to see the Government has proposed a number of significant changes, which are in line with the arguments made by the SME Committee of the Law Council in its submissions to the review. The arguments made by our SME Committee in its submission were also cited with approval numerous times in the report.

The main proposed changes are to:* make UCT's unlawful and introduce civil penalties for breaches* increase the small business threshold to less than 100 employees or $10 million tunover; and* remove the contract value thresholds entirely.
https://treasury.gov.au/publication/p2020-125938
Posted by Mike Terceiro at 14:30 No comments:

Interesting speech by Sims at the National Press Club. Not only did he seem to write off the new s46 as being useless, calling for a new unfair practices prohibition but he also called for changes to merger laws because the ACCC "hasn't won outright in a contested merger case since the current substantial lessening of competition test was introduced in 1992".

I think he may be writing off the new s46 provision a bit too soon, as it is not impossible to establish a substantial lessening competition (SLC) case. For example my team at the ACCC was able to establish SLC cases against spirited opposition from both Liquorland and Woolworths in the liquor cases back in 2006.Also in relation to merger cases, the reality is that the merger parties generally abandon clearly anti-competitive mergers in the face of ACCC opposition with only marginal cases going to court. The ACCC should expect to lose a high number of the marginal cases. The more significant issues are whether the ACCC (1) are opposing the right mergers (eg Vodaphone / TPG and PN Aurizon which were very weak cases) and (2) are running their merger litigation effectively (eg Metcash which was poorly run).
https://www.accc.gov.au/speech/tackling-market-power-in-the-covid-19-era
Posted by Mike Terceiro at 14:29 No comments:

I think this article overlooks the ACCC's previous 12 wins against Woolworths:

Some interesting reading in this Report. 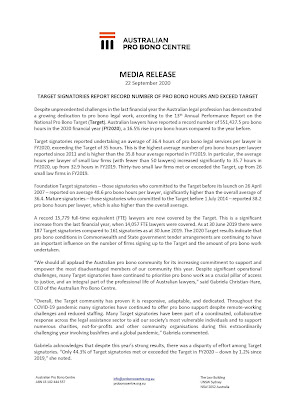 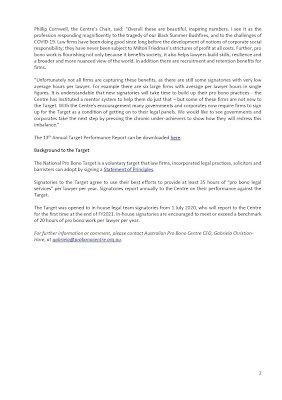 Posted by Mike Terceiro at 14:25 No comments: